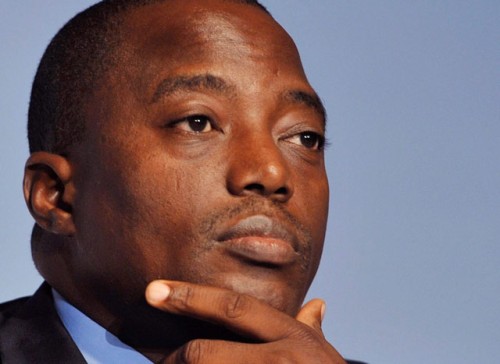 Congolese President Joseph Kabila named an expanded new government on Tuesday, with almost all his old team retained, as part of power-sharing deal to end a crisis over his wish to remain in power.

The presidential list of 60 ministers, read out on television, includes almost all members of the outgoing administration, who keep their posts, along with members of the opposition.

The announcement comes a month after Kabila named main opposition leader, Bruno Tshibala, as prime minister of the Democratic Republic of Congo, honouring a pledge made as part of the power-sharing deal agreed in December.

Tshibala is former secretary-general of the opposition Union for Democracy and Social Progress (UPDS) party, which has been at the centre of the political row with Kabila.
Tension has been mounting across the vast mineral-rich nation of 71 million people since December, when Kabila’s second and final term officially ended but elections failed to be held.

On New Year’s Eve, pro-government and opposition groups agreed to a deal brokered by the influential Roman Catholic Church that sought to avert a full-fledged crisis.
It said Kabila, 45, would remain in office until elections in late 2017, ruling in tandem with a transitional watchdog and a new premier chosen from within the ranks of the opposition “Rassemblement” (Unity) coalition.

But the death of coalition leader, veteran UPDS chief Etienne Tshisekedi, held up the deal.
Tshibala has since been excluded from both the UPDS and the Unity coalition.
Four UPDS deputies were named on Tuesday in the new government whose main task is to organise a presidential election before the end of the year.

The new faces in government were made possible by increasing the number of its members to 60 from the 54 in the previous administration.
However, given the social and economic crises in the country, that deadlines now looks little more than hypothetical.

Kabila has been in power since 2001. The DR Congo was plunged into a political crisis in 2011 when the previous presidential vote was tainted by complaints of massive electoral fraud.

Earlier Tuesday about 100 riot police surrounded the UPDS headquarters in the capital Kinshasa Tuesday, while a party spokesman claimed authorities wanted to stop them building a tomb for their late leader Tshisekedi.
Neither the authorities nor police would comment on the deployment.